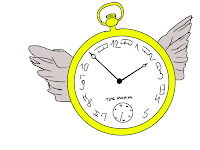 Who of us has never dreamed of time travel? Seeing your own grandfather as a child, correcting mistakes of the past or ameliorating the future – all these ideas can be found in sci-fi literature in a great abundance.

However, there are not just writers who endorse these ideas. Scientists also indulge themselves with plans of building some elaborate time travel device. From time to time the world of science is shaken by the new hypotheses that allegedly prove the possibility of time travel (either to the past or to the future) without contradicting the laws of nature.
One of these hypotheses was presented to the public in 1934 in a story “Branches of Time” by David Daniels. In his book “Time travel and other mathematical bewilderments” Martin Gardner puts this in like that: “The basic idea is as simple as it is fantastic. Persons can travel to any point in the future of their universe, with no complications, but the moment they enter the past, the universe splits into two parallel worlds, each with its own time track. Along one track rolls the world as if no looping had occurred. Along the other track spins the newly created universe, its history permanently altered. When I say "newly created," I speak, of course, from the standpoint of the time traveller’s consciousness. For an observer in, say, a fifth dimension the traveller’s world line simply switches from one space-time continuum to another on a graph that depicts all the universes branching like a tree in a meta-universe”.

It might seem to you that the idea is totally bizarre. However, many scientists, including many respectful physicists, are still obsessed with it. For instance, Hugh Everett III's Ph.D. thesis "'Relative State' Formulation of Quantum Mechanics" (Reviews of Modern Physics 29, July 1957, pp. 454-462) outlined a meta-theory in which the universe at every micro-microinstant branched into countless parallel worlds, each a possible combination of micro-events that could occur as a result of micro-level uncertainty. The dissertation was commented by John A. Wheeler's who provided a rather favourable assessment in which he pointed out that “classical physicists were almost as uncomfortable at first with the radical notions of general relativity”.

Another extravagant hypothesis that concerned time travel was forged in the depth of theoretical physics. The hypothesis that introduced the concept of so-called “time loops” still encourages many time travel fans. The “time loops” (or “closed timelike curves” (CTC)) concept was most introduced by Kurt Gödel in 1949. The scientist constructed a rotating cosmological model in which one can, in theory, travel to any point in the world’s past as well as future, although travel to the past is ruled out as physically impossible. In such a universe, the distance between particles of matter is unchangeable. Therefore, one can start travelling from any given point in the universe, circle it and come back to the initial point. In another words, the traveller is circling the universe not only in space but in time and his path looks like a spiral span around a cylinder. And because single loops of the spiral might be located close to each other, the hypothesis allows “skipping the spirals” and thence “time hopping”.
Each of these hypotheses is interesting in its own way and yet each of them is full of huge discrepancies and contradictions. From the points of view of orthodox scientists, none of these hypotheses might sustain any serious critics. For many people it might seem that the time travel problem is just another amusing paradox invented by sci-fi writers but the thing is not that simple.

A brilliant Russian astrophysicist from the University of Copenhagen, Igor D. Novikov, who wrote “River of Time”, a book about paradoxes of time travel, explains the possibility of time travel on the basis of the relativist effect when time slows down for the object that moves with relatively high speed. An astronaut who would come back to Earth after a thirty-year travel in a spaceship might find himself more than one and a half century into the future, right in time to meet his grand-grand-grandchildren. Thence, the possibility of time travel into the future was more or less explained by the science. However, the problem with the time travel into the past still remained unexplained.

Thinking of how the possible time machine might look like, physicists draw a model of two black holes with entrances and exits marked by the letters A and B. However, the question that still troubled them was: what would happen if one connects both entrances with a tunnel? Suppose that you can stabilize the walls of this tunnel using some supernatural substance and place the entrance B to some distant star. Therefore, the entrances A and B of both black holes would be located at a unimaginable distance from each other, while the exits would be connected by a relatively short tunnel.

Igor D. Novikov describes that both the diameters of entrances and the “tunnel” might, in theory, be modelled in such a way that the gravitational influence on living beings in the tunnel would be sustainable. The resulting construction would represent a true space machine! If a traveller covers the distance from A to B in the “normal” space and then would come back trough the tunnel, nothing much would happen: some time – say, 10 years, will be spent in route. However, if the entrance A remains still but the entrance B starts spinning around A with an enormous speed, we would end up with a time machine!
In a structure like this, a watch placed in entrance B would lag behind from the watch placed in entrance A. Therefore, the time would flow slower and that would be clearly registered by the observers in entrances A and B.
Imagine a traveller moving from A to the orbit of B. The traveller would find a precise time when the entrance B is in front of him and would plunge into it. After that, the traveller would travel back to B through the “tunnel”. Suppose that the traveller spent 10 years to get to B (in A’s time). However, according to the B time, only 5 years had passed. In B’s time, the start happened at 10th year and by the time the traveller was in B, the watch showed 15 years. However, by that time the watch in A had already counted 30 years. Now the traveller jumps into the whole B; if he could see the watch in A, he would register that the same watch shows the same time as in B, i.e. 15 years after the spin. The traveller quickly passes the short “tunnel” and emerges from the whole A in the same time he started his journey.
However, he started his journey when the watch in A showed 20 years but he came back when it showed 15 years! Thence, the traveller came back before he started in journey – he made a time travel!

As you can see, the physicists like to play tricks. The idea of “time loops” might seem unbelievable to some of you, however time (and science) will show whether this idea might be implemented to build something many people are lounging for – a genuine time machine!
Posted by www.strielkowski.com at 09:33 No comments: