Your are probably asking yourself now “what is the connection between all these supernatural things and economics?”. You are about to get your answer.

Are you aware of who got the Nobel Prize in Economics this year? Christopher Sims and Thomas Sargent did (for their “empirical research on cause and effect in the macroeconomy”)!
Christopher Sims is known (amongst his other numerous achievements) for designing a theoretical framework called "rational inattention". The framework provides a general approach to modelling decision-making of economic agents with limited abilities to obtain and process information. The concept of the rational inattention assumes that all pieces of information are freely available, but agents process only the most important of them by using channels of limited information capacity. Agents simply do not pay full attention even to information that is easily attainable with a negligible cost (especially today, in the era of Internet, Wi-Fi and smart phones)

Do you happen to watch the TV series called “Fringe”? If you do, recall the 3rd season’s episode called “The Plateau”. In this particular episode, the FBI team on Earth-2 (the Earth in our parallel universe) is after a man who has been made immensely clever thanks to the medical experiment. The man has a brain like a supercomputer and can obtain and process all available information from his surrounding (and can make the bus driver to hit the doctor who wants to put him back into the mental institution). The story was actually based in Daniel Keyese’s book “The flowers for Algernon” written in 1959 (which is a very beautiful and very sad book but we strongly recommend you to read it!). The man (named Milo) is so “rationally attentive” that would predict any event and could even start a chain of events. He is caught by the agent Olivia Dunham eventually because he assumes she would obey the warning signs at the construction zone (although she did not because she was from our universe (Earth-1) and did not know the meaning of the sign).

How would our economy behave if the world was full of “Milos”? How would the markets react, how would the prices be formed? An interesting question, isn't it? And worth giving a Nobel Prize for, too!
We are investigating this matter now and working on a paper that would explain these issues. Hopefully we will be ready to present our results soon. Watch out for the link and learn more about this problématique. Follow our blog and stay tuned in!
Posted by www.strielkowski.com at 11:08 No comments: 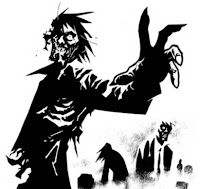 And now let us look at a completely different (but also supernatural) topic – zombies. Do you think zombies exist?

Well, we do not mean those voodoo-like zombies (we will come back to voodoo later), but the good old fellows depicted in films starting from Romero’s timeless classic “Night of the Living Dead” from 1968 or most recent Boyle’s “28 days later” (or its sequel “28 weeks later”), a British parody “Shawn of the Dead”, and of course “Resident Evil” starring Mila Jovovich.

What science has to say about the existence or inexistence of zombies is the following: if scenarios shown in most of zombie films were real, pretty soon the world would have been taken by zombies. A mathematician from the University of Ottawa named Robert Smith? (yes, with a question mark – he says it have made lots of bureaucrats very upset) does his research on zombies and even published a book on that topic. He claims that zombies (if they existed) would have eventually taken over the world unless quick and aggressive attacks are made (aim for the head!). The progression of zombie infection is fast and unless isolated, quarantined and (even better) killed, very soon everyone will become a zombie (and then dies, as far as there is nothing left to eat). What a gloomy perspective of an end for the human civilization!

Another interesting academic paper dealing with zombies (and also ghosts and vampires) was written by a theoretical physicist from the University of Central Florida, professor Costas Efthimiou (in cooperation with Sohang Gandhi from Cornell University). What they claim is that zombiefication might be just “a skilful act of poisoning” when the person is loosing the thinking process of the brain, a process “that makes his human”.

So, what the conclusion would be? Unlike vampires, who are smart and have their thinking process working very well (too well indeed), zombies (if they existed) would have revealed themselves very quickly. Have you seen a zombie recently? And I do not mean your colleague who always seem to be asleep (even he types something on his computer) or these guy at the local pub who sits over his beer and watches football on the TV screen. Well, if you did not that might mean they do not exist (at least yet).
Posted by www.strielkowski.com at 10:39 No comments:

And now back to the vampirical theme again. Have you ever wondered whether vampires could actually LIVE amongst us?

Although their existence is possible (at least from the scientific point of view), as it was mentioned in the previous post, one may ask why we do not see them or meet them every day. One possible explanation might be that they are well-hidden in their coffins or hide-outs and only come out at night. Another explanation might be that they are so scarce, that a chance of meeting a vampire is practically equal to zero.
However, some individuals we occasionally meet DO make us think that the argument is not lost and that vampires are among us. There are lots of them among economists and mathematicians (especially our colleagues).

In particular, there is one certain gentleman we know, a Director of a respectable Prague-based research Institute. We have been suspecting him for a long time now! And there are many things to back up this conclusion: i) no one has ever seen him walking in daylight, ii) most of the time he lingers in his office behind closed shutters and windows and when one is invited to meet him, he receives his guest in a dark 19th century room with frescoes ceiling dimly let by one lamp (which proves he has a style – so common for vampires (remember Lestat, Edward Cullen or Bill Compton)), iii) he looks pretty sinister, iv) he always looks pale and never wears a tan, even though he claims he goes on vacations sometimes, v) he is often away (allegedly on business trips, but we know better – he probably goes out hunting or attends vampires councils :)).

Look around you! If you work at economics, mathematics, physics or other department, there might be similar sinister-looking individuals among you. They always stay in the shadow, they linger behind the closed doors of their offices and never expose their pale bodies to the sun. Think about how many colleagues are there whom you never met during the day. You always see them there when you are about to leave and they are there, in their offices, pretending to work, wanting to chat, inviting you to come in and talk to them. Be careful! We know better and advise you to stay away from those suspicious individuals – you might be turned into one of them!

Posted by www.strielkowski.com at 09:21 No comments: